The trouble with Roundness

One of the geometrical tolerance characteristics is ‘Roundness’ (or ‘circularity’ if you are working to ASME Y14.5).

The way in which Roundness has always been defined in the past is that it applies to the line element created in any plane perpendicular to the axis of the feature.

For these reasons, a proposal was put forward in the ISO technical committee TC213, several years ago, to change the definition of roundness, so that it would be defined as a tolerance which applied perpendicular to the surface.  The committee flip-flopped over this for a while; there was a strong technical argument to support the change, but changes to something so long established were bound to cause confusion and resistance. At first the change was going to be introduced, then it wasn’t – every time it was discussed, it caused a great deal of debate.

For a while the plan was then to provide an alternative to roundness for cases where it should be applied normal to the surface, consisting of  a Circular Run-out tolerance, with the feature used as its own datum.  On examination however, it appeared that this would lead to a subtly different outcome, and this plan was also abandoned. 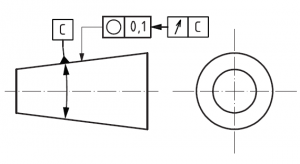 More information about the direction feature symbol can be found in Clause 15 of ISO 1101:2017.