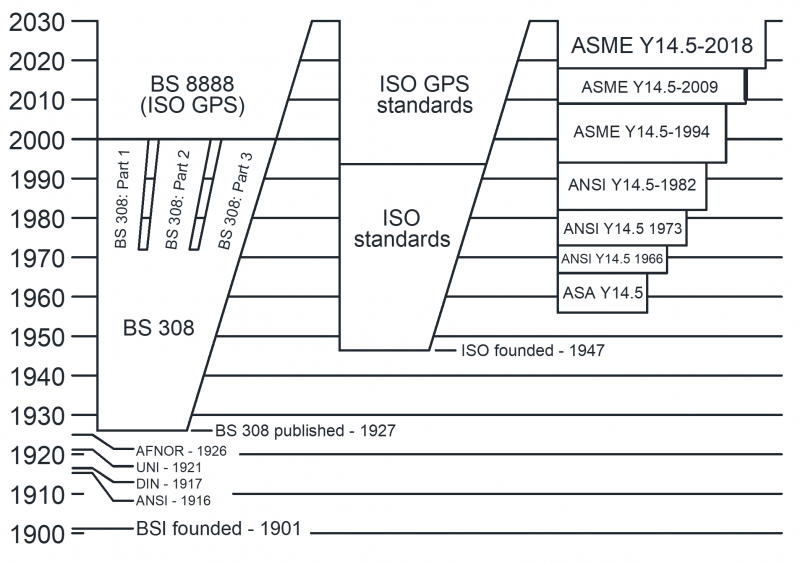 The world’s first national standard for engineering drawing was published in 1927 by the British Standards Institution (BSI).  This was BS 308, which in one edition or another came to be found on the book shelves of almost every design, manufacturing and inspection department in the country.  BS 308 was also widely used overseas, throughout the British Commonwealth.  The standard was in use in India, Canada, Australia, New Zealand, parts of Africa, and many other countries.

BS 308 was developed, revised and expanded over the years. Changes to the standard came about as it was extended to cover new areas, and to keep abreast of technological development and changes in working practice.  In 1972, it was split into the three parts that many engineers and designers are familiar with.

Meanwhile, ISO was developing international standards for engineering drawing and tolerancing. In a number of cases, ISO standards were developed to cover particular topics before any corresponding coverage was developed for BS 308.  Rather than attempting to duplicate the ISO standard material in BS 308, these ISO were simply adopted as British Standards, and referenced by BS 308.  By 2000, a complete set of British Standards for engineering drawing included around 30 ISO standards in addition to BS 308 itself.

The withdrawal of BS 308 took place in 2000. Designers and engineers now had to make use of the extensive catalogue of ISO standards that cover different aspects of Technical Product Specification.  In order to make this transition as painless as possible, BSI produced a new document as an index to the ISO system, to help end-users find their way around it.  This document is the standard known as BS 8888.

BS 8888 got off to a very rocky start, as much of industry expected it to be a kind of new, improved BS 308, and instead, found that it consisted of little more than a long list of ISO standards, and gave virtually no guidance on how to produce a specification.  Where BS 308 had provided guidance, explanations and examples on various topics, BS 8888 simply listed the ISO standards which now dealt with that topic.  It was in effect just an expensive shopping list.

In recent years, BSI have changed their approach to BS 8888.  Instead of just listing the ISO standards which deal with a subject, BS 8888, in many areas, now reproduces much of the content of those ISO standards.  The aim of the standard is no longer simply to index the ISO system, but also to make directly available much of the key material of the ISO standards directly, all in one place.  The objective of the team responsible for BS 8888 is that 90% of the material that most engineers, designers and technicians require regular access to can be found directly within BS 8888.  In this way, the standard seeks to make the ISO system much more accessible and far more useable.  The first revision to take a major step in this direction was the 2013 revision.  Two more revisions have been published sine then, each taking this approach furthere.  The latest version is BS 8888:2020.  In some ways, BS 8888 has returned to its BS 308 roots, and is once again a document which provides rules, definitions and guidance for those involved in creating or interpreting technical specifications.

There are a number of changes and developments to working practices, many of which would have been introduced through a new version of BS 308 if it had not been withdrawn. Principle changes can be summarized as follows:-:

The benefits of standardisation became widely recognised during the industrial revolution. In the first quarter of the 20th century, national standards institutions started to appear to manage and advance this process in most of the major industrialized nations.  The British Standards Institute (BSI) was founded in 1901, the American National Standards Institute ANSI appeared in 1916 (initially as the American Standards Association, ASA), the German (DIN) in 1917, and the Italian (UNI) and French (AFNOR) equivalents appeared in 1921 and 1926 respectively.

The standards which govern mechanical engineering specification have become rationalised over recent decades, and there are now two systems of standards which are used almost universally. These two systems are the American system, based around the ASME Y14.5 standard (GD&T), and the ISO system, known as Geometrical Product Specification (GPS), which is based on a number of interlinked ISO standards.